I’m eating a terribly bruised banana.  It’s way too easy to abuse bananas.  I swear.  You leave them alone for five minutes and they’re barely edible.  Just like children.

It’s a beautiful, mild day in New York City, but I’ve spend the majority of it in this dang’ed cubicle.  And wouldn’t you know it, during my 15 minute break, I go outside to catch the last of the day’s sunlight, and a guy soliciting my nonexistent money for a perfectly deserving organization sits down beside me.  Don’t you know, “Matthias” from “Greenpeace”, that I just gave a dollar to that drug addict on the subway the other night?  And he said, “Wow, a real American dollar bill!  I haven’t seen one of these in ages!”  And you expect me to also help do something to protect the environment and promote peace? … I guess that’s reasonable enough.

I went grocery shopping for the first time in weeks the other day and I saw this baffling thing on the shelf: 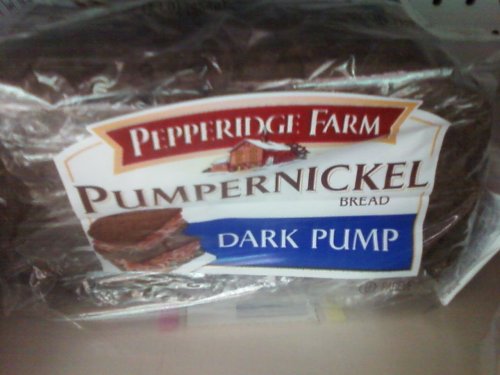 Who at Pepperidge Farm decided the word “pumpernickel” needed to be shortened to “pump”? And who backed that idea up enough for it to end up on that poor loaf of bread? It’s nothing short of tragic, especially in light of the word’s fascinating and bizarre origins I just found on Dictionary.com: Pumpernickel orig., an opprobrious name for anyone considered disagreeable, equiv. to pumper(n) to break wind + Nickel hypocoristic from of Nikolaus Nicholas (cf. nickel); presumably applied to the bread from its effect on the digestive system .

There’s something pornographic about that phrase, “Dark Pump,” right? I know it’s not just me.