When I was younger I had it in my head that Jay Leno was a funny guy.  I’ve since reversed my position.  I’ve also reversed my position on Letterman who I thought was just another one of Regis Philbin’s unfunny friends.  Oh, sidenote–why is Regis doing commercials for Sweet’N Low no-calorie, yes-cancer sweetener?  Apparently this ad has been out for awhile, but I just caught it.  Regis is in the back of a cab and the Pink Panther is the cab driver.  That dude is everywhere.  He and Kelly Ripa are literally the spokespeople for EVERY bank.  Or maybe just for Commerce that became TD Bank.  I can’t keep up with bank mergers. 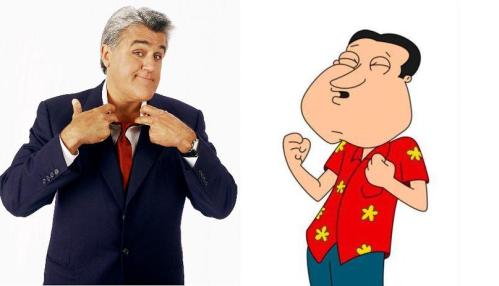 So, here’s my solution to the problem that is Jay Leno.  The majority of people seemed pretty excited that he was leaving the Tonight Show, only to find out about this 10 o’clock slot crap.

I propose that Jay’s 10 o’clock show be handed over to the much funnier, much more human Ross the Intern from the show.  They had him cover the red carpet at the Golden Globes and compared to Jay’s monologue which garnered a chuckle or two, Ross the Intern had me swimming in tears of laughter.  I can’t find the clip of his coverage from the Globes, but click here for him covering Elton John’s Oscar Party. Ross to Diddy: “You can be the Kelly to my Regis!”