I paid off a collection of library fines this evening that totaled $15.75.  A lot when you consider that libraries, by design, are meant to be free.  But not a lot when you consider just 1 hardcover book can run you upwards of twenty-five bucks.  That $15.75 comes from a total of 13 different books.  Thought I’d share some of the highlights from the list.

The smallest fine came to twenty-five cents.  That because I neglected to return The World According to Mister Rogers.  I have no regrets about this fine or this book.  I borrowed it to complete research on the one-man play I was writing about Mister Rogers.  I’ve since sold the two year rights to that play and they paid me more than a quarter, so I came out in the black.

The highest fine is also my most recent one.  $2.25 for an overdue copy of The Best American Essays: 2010.  I actually called to refute this fine because I thought that I had returned the book.  I spent about fifteen minutes looking for it in my apartment, purses, shelves–nothing.  Then, several days later, I found the book inside of a bookbag I hadn’t used in awhile.

Most unfortunate fine: 75 cents for a book titled The Hidden Power of Dreams.  I don’t think I read more than three pages of this book.  I picked it up because I saw the spine and said to myself, “Yes, I do think there is hidden power in dreams.  I will read this and affirm that thought.”

The receipt the library gave me after I paid is almost 19 inches long.  I was worried that the guy at the circulation desk would tsk me.  Tell me I’m a lazy, irresponsible person for accumulating fines I could have easily avoided, as well as keeping materials from other library patrons in doing so.  But I don’t care.  I look at this long receipt and I feel a distinct sense of pride.  To me the receipt and the fines say–You read.  You’re literate.  You like ideas and information and the written word.  You like them so much, you hoard them.  You carry them around with you everywhere and you know you have to return them at some point, but not today.  Or, maybe it is today, but what can ya do?

I hope the NYPL appreciates my money.  I could use that money, but I know they can, too.

Just got back from the library.  Nearly took out this book:

But I thought better of it. You know those AXE body spray commercials in which women flock to men who spritz themselves with that god awful stuff? Well, that’s how I am with cats. Not in a sexual way. Just in that frenzied, I need to touch you or I will die way. In line at the drug store last week, the cashier was showing the customer ahead of me photos of her cat on her cell phone, and I practically tackled the magazine and candy rack trying to get a peek.   I didn’t destroy any merchandise, but I did screech, “I WANT TO SEE!”

It’s not normal.  So, I took these books out, instead:

We'll see if I actually devote time to its pages.

And then, one with a matching cover that I think will be oddly inspiring despite the subject matter: 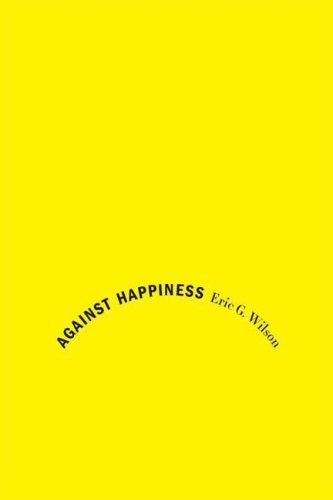 Against Happiness: In Praise of Melancholy

Speaking of melancholy…a collection agency called about an outstanding dental bill before I could finish writing this post.  This clip instantly came to mind as I reminisced about how awful that damn dentist was:

Ode to the Library

This is probably an unnecessary statement due to the name of this blog, but…I love the library.  It’s such a wonderful concept.  Books, magazines, CDs, DVDs all in one place.  I especially love the library now that I’ve moved to Queens.  Back in Massachusetts, in my hometown, the library was ruined by the menopausal women who worked there and by the possibility of running into someone terrifying.  Someone like…the home economics teacher who my older brother assaulted, or the guy who told me about my brother looking at porn in first period, or the other guy who told me he was taking the school bus to my house to buy drugs from my brother, or just running into my brother himself.  Just kidding.  He doesn’t go to the library.

But in Queens it’s different.  It’s also an adventure, but not one that will stir up nostalgia for my childhood.  Last time I went, for example, I was writing poetry on the second floor when a guy approached me holding a Bengali/English dictionary.  “Are you American?” he asked.  “Yes,” I said.  He asked me to pronounce “enthusiasm” with my American accent.  Then he explained that in Bangladesh he learned English, but it was British English.  And he said something about eggplant and okra, but I didn’t understand.  Then the library was closing, so we had to part ways, but he invited me to the Indian restaurant owned by his uncle where he works.

At the library in my hometown you’d never get invited to an Indian restaurant.  You’d get slammed with a $30 fine for returning a copy of Angela’s Ashes that was (probably) damaged before you took it out.  Then you’d drive to the ATM, drive back to the library, and hand the heat flash of a woman two twenty dollar bills with tears streaming down your face because now you can’t afford to bail your brother out of jail.