Thanks iLike.com for clarifying that. And thanks Lynyrd Skynyrd for these lyrics:

Oh, take your time. Don’t live too fast.
Troubles will come and they will pass.
Go find a woman–you’ll find love.
And don’t forget, son, there is someone up above.

Forget your lust for the rich man’s gold.
All that you need is in your soul.
And you can do this, oh baby, if you try.
All that I want for you, my son, is to be satisfied.

This song was on my mind today. Mostly because I submitted a two week’s notice for one of my jobs. It felt impulsive and liberating. But really I’ve been thinking about doing it for awhile. I’m only there one day a week for one thing. It doesn’t pay all that well. And it doesn’t challenge or stimulate me in the slightest. (A cubicle is involved.)

So, out with the old, in with the new. Which, is this economy, doesn’t mean much. But fuck it. All I need is in my soul.

I <3 Barbara Bush and Artificial Flavoring

Today I woke up and I baked cupcakes. The motivation came from wanting to give one to someone I love. But before I did that I was reading status updates on Facebook off of my phone, and someone paid tribute to this forever beautiful and gracious lady:

“At the end of your life, you will never regret not having passed one more test, not winning one more verdict or not closing one more deal. You will regret time not spent with a husband, a friend, a child, or a parent.”

So back to the cupcakes. I prepared a box mix of marble fudge. And it instructs you to pour the fudge mix on afterwards, so it ended up creating some cool designs (because I didn’t try too hard to achieve a marble effect). They’re like the Rorschach Ink Blot Test! What do you see:

P.S. Speaking of box mixes with which to make not nutritious cupcakes, I HIGHLY recommend checking out the first two episodes of “Jamie Oliver’s Food Revolution.”  He’s completely British and brilliant.

The Dalai Lama is a failure (and so am I).

When I was young I sometimes repaired watches. I tried and failed many times. Sometimes I would lose my patience and hit the watch! During those moments, my anger altered my whole attitude and afterwards I felt very sorry for my actions. If my goal was to repair the watch, then why did I hit it on the table? –The Dalai Lama, The Dalai Lama’s Book of Wisdom

I made a bad pot. For some reason, I always thought that I was special and different. And I guess I just have a really hard time when I want to be good at something and I suck. –Jeff Winger, NBC’s “Community”

The Dalai Lama and the writers from “Community” bring up a theme I’ve been struggling with lately.  It’s hard feeling like a bumbling novice.  But it’s even harder striving for something that, at worst, is impossible, and, at best, is ridiculously subjective–perfection. I want to learn things, I want to experience life. I don’t want to beat myself up like one of the Dalai’s watches.

As the end of sitcoms go, I think things generally turn out okay, for the best.  If you pass me on the street, looking distressed and dishevelled, you’ll know it’s me when I stop in my tracks and proclaim, “Goddammit, I’m doing the best I can!”  Or I might just angrily whisper to myself over and over, “At any moment you could die, the least you can do is try.”

Sometimes when people are vaguely complaining about mundane things, such as their DVR failing to record this week’s episode of “Community”, or China continually giving them reasons to wear their “Free Tibet” gear, I’ll halfheartedly reply, “Life is hard.”  But fuck, man.  It is!  It’s also a whole slew of other things, but today there will be no devil’s advocating–life is frustrating and hard.

I accidentally got a psychic reading a while back, and she was right–I do feel like I keep taking three steps forward and two steps back.  That psychic also told me that I’d be fine if I kept smiling.  Which still strikes me as an obnoxious thing to say.  As frustrating and hard as life’s failures feel, they’re often the things that teach us the most and open our eyes to the right steps to be taking.  Strife and angst serve a purpose.  Blah blah blah if it weren’t for difficult times we’d never grow.

Also, the Dalai Lama repaired watches?!  I had no idea.

16,000 blueberries from one plant?  20 bowls per week? 4 pints of blueberries EVERY DAY?! I don’t trust these things:

I’m forever indebted to the man behind MonkeyBlogMonkeyDo for sending me the juiciest bit of pigeon news perhaps in the history of pigeon news:

Animal Planet is making a show about Mike Tyson’s quest to become a champion pigeon racer!!

Thank God.  And about time.  I don’t own a TV, but I’m going to find a friend with a DVR and live at their house, watching episodes over and over again, until I slowly disintegrate into their couch.

I remember the day I learned that Mike Tyson loved pigeons.  And one day I will be telling my grandchildren about this day, the one when the MonkeyBlogMonkeyDo guy sent me this link.

My favorite part of that article is that I can now steal one of the commentors ideas of framing this magazine cover in their house: 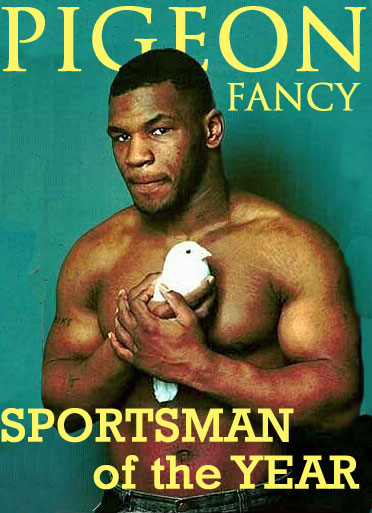 Not one of your pertinent ancestors was squashed, devoured, drowned, starved, stranded, stuck fast, untimely wounded, or otherwise deflected from its life’s quest of delivering a tiny charge of genetic material to the right partner at the right moment in order to perpetuate the only possible sequence of hereditary combinations that could result–eventually, astoundingly, and all too briefly–in you. —Bill Bryson, A Short History of Nearly Everything

That same, shockingly, goes for all of these people:

Life and the Academy

After watching the Academy Awards tonight, I’ve got this feeling in my chest.  It’s tight and open at the same time.  It’s at ease and anxious.  It’s the same feeling I have when I stop and think about life–the overwhelming feeling of recognizing its beautiful mysteries, contradictions, and ambiguities.

I’m left with that feeling now because the Oscars are a celebration of creativity.  And if I’m truly honest with myself, I feel most alive when I’m creating.  No matter if it’s a poem, essay, performance, or conversation with a friend.

The speech that most directly related to all this came from Michael Giacchino who won Best Original Score for his work on “Up”.  He said:

I was nine and I asked my dad, ‘Can I have your movie camera? That old wind-up eight milimeter camera that’s in your drawer?’ And he goes, ‘Sure, take it.’  And I took it and I started making movies with it and I started being as creative as I could.  And never once in my life did my parents ever say, ‘What you’re doing is a waste of time.’ Never. And I grew up I had teachers, I had colleagues, I had people I worked with all through my life who always told me, ‘What you’re doing is not a waste of time.’  So that was normal to me….

I know there are kids out there who don’t have that support system, so if you’re out there and you’re listening–listen to me: if you want to be creative, get out there and do it.  It’s not a waste of time.

In the end, the competition doesn’t matter.  The support and the love–they do.  And creativity?  It’s not a waste–it’s life itself.